Tesla Model Y completes the equation for the average household

Tesla Model Ys performance and practicality will complete the equation for households in the US, China, and beyond.

In the United States, demand for crossovers has increased over the last two decades. Crossovers only accounted for about 4% of vehicle sales in 2000 and meteorically rose to roughly 40 percent of US sales in 2018. In China, the biggest automotive market in the world, the picture is basically the same as more people veer away from light vehicles and go for crossovers and SUVs. Tesla will answer the need of households for a vehicle that presents a good balance between a sedan and an SUV.

The Model Y makes sense for families looking for a bigger ride (but not as big as full-sized SUVs) that offers more space for people and cargo while not burning a big hole in ones bank account. The Model Y is perfect for families leading an active lifestyle or for those looking for a second vehicle that complements their daily driver such as a Model 3. The Model Y is not just a chunkier Model 3. The electric crossover answers these needs of the average household and has the potential to become another cash cow for Tesla to help it achieve consistent profitability.

Tesla Model Ys range and efficiency were highlighted during the Q4 2019 earnings call of the Silicon Valley-based electric carmaker. CEO Elon Musk told the electric vehicle community that the Model Y now boasts the highest energy efficiency rating among electric SUVs at 4.1 miles per kWh and has an EPA rating of 315 miles on a single charge. Tesla has started limited volume production in January and expects to make first deliveries of the electric crossover on March 15.

make sure we get that production ramp going and reach volume production as soon as possible with Model Y. Yes, go as fast we can with Model Y and make sure its a great product. I think there are some things that will differentiate it. I think when people do a teardown of the Model Y, I think they will be impressed about some of the things they see, Musk said during the Q4 2019 earnings call.

While a Model Y teardown is still a long shot, the latest sightings of the much-awaited electric crossover show why the vehicle can be a practical choice for people on the go or families with an active lifestyle.

A Tesla Model Y with roof rack was recently spotted along the State Route 237 in Sunnyvale, California. The sighting gives Model Y fans a glimpse of how roof-mounted rails will look on the electric crossover.

The video posted by RKT on YouTube shows a roof rack that reminds one of the currently available Model 3 roof rack that can easily be installed by securing four mounting points on the all-glass roof of the vehicle. With the Model Y sharing roughly 75% of its DNA with the Model 3, theres a high possibility that a similar roof rack for the Model Y will be sold by Tesla.

With a roof rack, the Model Y can be a perfect road trip vehicle for a group of five or even seven bringing bikes, skis, other sports gear, or cargo boxes. The average maximum load rating or roof racks is around 150 lbs.

Check out RTKs video of the Model Y with a roof rack:

Last December, a Tesla Model Y with a clearly visible tow hitch was spotted hinting that the all-electric crossover would be perfect for towing small trailers or campers for families who love the outdoors.

Just last week, another Model Y was seen on the road, this time towing a dirt bike. An image originally captured by Rober Rorschach was shared on Twitter by @Testletter.

Model Y towing a dirt bike. I think the towing package is going to come standard in the Model Y (at least in LR versions)

This is another great demonstration of how the upcoming electric crossover is ideal for people who lead an active lifestyle. It is not yet confirmed if the Model Y will come standard with a tow hitch or if it will come as an option but it is a clear indication that Teslas testing such feature and it knows how the crossover could be used by the electric vehicle community. Model 3 in Europe comes with an option for a tow hitch but this option is not available in North America.

It has been highlighted how Tesla seems to haven been underpromising and overdelivering when it comes to Model Y and this strategy can clearly upset the naysayers of the electric carmaker. The Model Y, according to Tesla will have higher gross margins than Model 3 and Elon Musk even predicts that it can outsell its other vehicles in the lineup. And with Model Y sightings slowly revealing the details of how the vehicle can be so useful for people. The 2nd-row seats that can be individually folded are a stroke of design genius in terms of practicality but it can be clearly seen now that Tesla paid attention to the details that matter most to consumers.

New Model Y images that surfaced over the weekend show that the Model Y also offers generous space in its trunk and there could also be additional space under the main trunk. The order page on the Tesla website indicates that the vehicle will have a max cargo volume of 66 cu.ft. making it comparable to the amount of cargo the more affordable Honda CR-V can carry and offers a bit more space than its touted rival Ford Mustang Mach-E that comes with 59.6 cubic feet of room.

Below are the images of the Model Y trunk first posted by Thomas Andre Davik on the Tesla Model Y Enthusiast Facebook Page and the extra storage below the main trunk photo by Josh Jones on the same fan page: 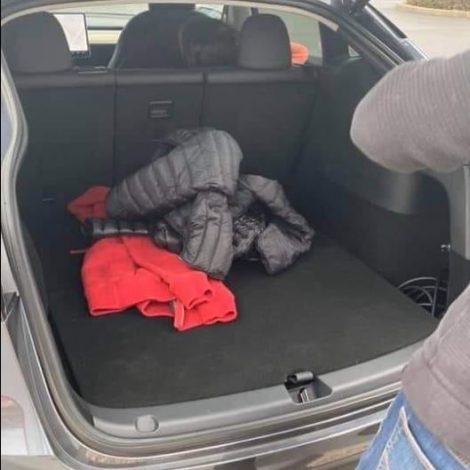 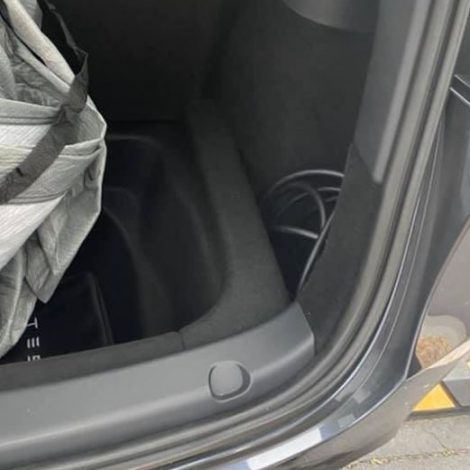 The latest images also clearly show that the second-row seats offer generous headroom and that the spacious trunk can easily be reconfigured to give enough space for the third-row seats to allow the vehicle to carry seven adults. And that is another practicality factor that can help the Model Y stand tall against its rivals.

The post Tesla Model Y completes the equation for the average household appeared first on TESLARATI.