This post is part of a virtual book tour organized by Goddess Fish Promotions. Jerry Hack will be awarding a $20 Amazon/BN GC to a randomly drawn winner via rafflecopter during the tour. Click on the tour banner to see the other stops on the tour.

Background of the Book
The background for the book begins when I was 9. At the time I was the youngest of four children and the only boy. My oldest sister Marlene was watching the NHL Stanley Cup Finals between the Chicago Blackhawks and the Montreal Canadiens. I walked into the room and saw what was on the TV and decided to sit with her and watch. Marlene was my hero. I thought she was the smartest person alive and I found her endlessly interesting and entertaining. I loved her as much as is humanly possible for somebody to love another. She was almost seven years older than me and instead of being my sister, she was more like a second mom. If I ever did anything of note, I always wanted to show or tell her first. In return, she was my cheerleader. Always encouraging me and happy whenever I accomplished the smallest achievement. When I learned how to ride a bike she was jumping up and down and clapping like I had just won the Tour de France. I absolutely hated to disappoint her. I would rather chew glass.

While we were watching the games in 1971, I was mesmerized by the two goalies. Ken Dryden and Tony Esposito. I knew what I my life’s ambition was to be at that moment in time. I was born to be a goalie. From that time on, I didn’t want to do anything else. I lived it and breathed it. It became my obsession for the next 45 years. I wasn’t able to play ice hockey as it was very expensive, and with 5 kids to raise (my younger sister was born in September 1971) it just wasn’t a possibility. But street hockey was another matter. All my friends seemed to be in the same boat. None of them played ice hockey but loved playing street hockey. It stayed that way until I was 18 and out of high school for a year. Through a twist of fate, I was able to join a men’s recreational ice hockey team (most people refer to it as “beer league”). I didn’t even know how to skate. People would tell me that the goalie has to be the best skater on the team. Let me tell you, I was far from being the best skater. I probably was 10 years behind the second worst skater on the team. I found myself always falling backwards. Somebody would be winding up for a slapshot and I would be flat on my back waving my hands in the air. My dream was to get paid to play hockey. And behind the scenes, there was always Marlene, cheering me on.

When a boy is born (since Manon Rheaume is the only female to ever play in an NHL pre-season game, we’ll stipulate the odds are even greater for girls) and starts playing ice hockey at the age of 5 or 6, his odds of making it to the NHL are about 0.1%. I was starting at the age of 18, so the odds of me making it were astronomical, but I didn’t care. I was finally doing what I was born to do. I played whenever I could, wherever I could, with whomever I could. Someone I knew referred to me as a “hockey whore” because I would play with anyone. As years went by, I got better and better and finally realized my dream of getting paid to play hockey. I didn’t make it to the NHL, but I got close enough. I met a lot of amazing people.

Best part is, I got to tell Marlene all about it. She was so proud of me. The worst part is, she only got to see me play one time. She had always planned on seeing me play more often, but our schedules just never seemed to jive. Marlene passed away on August 12th, 2005 from cancer. It is the toughest thing I have ever had to deal with. For the next five years, the grief was always with me, just below the surface, and I always felt that I could break down at any time. Whenever I played after that, I was hoping that she was watching and that she was proud of me. My book is, in part, dedicated to my big sister Marlene. She is, and always will be, my hero. 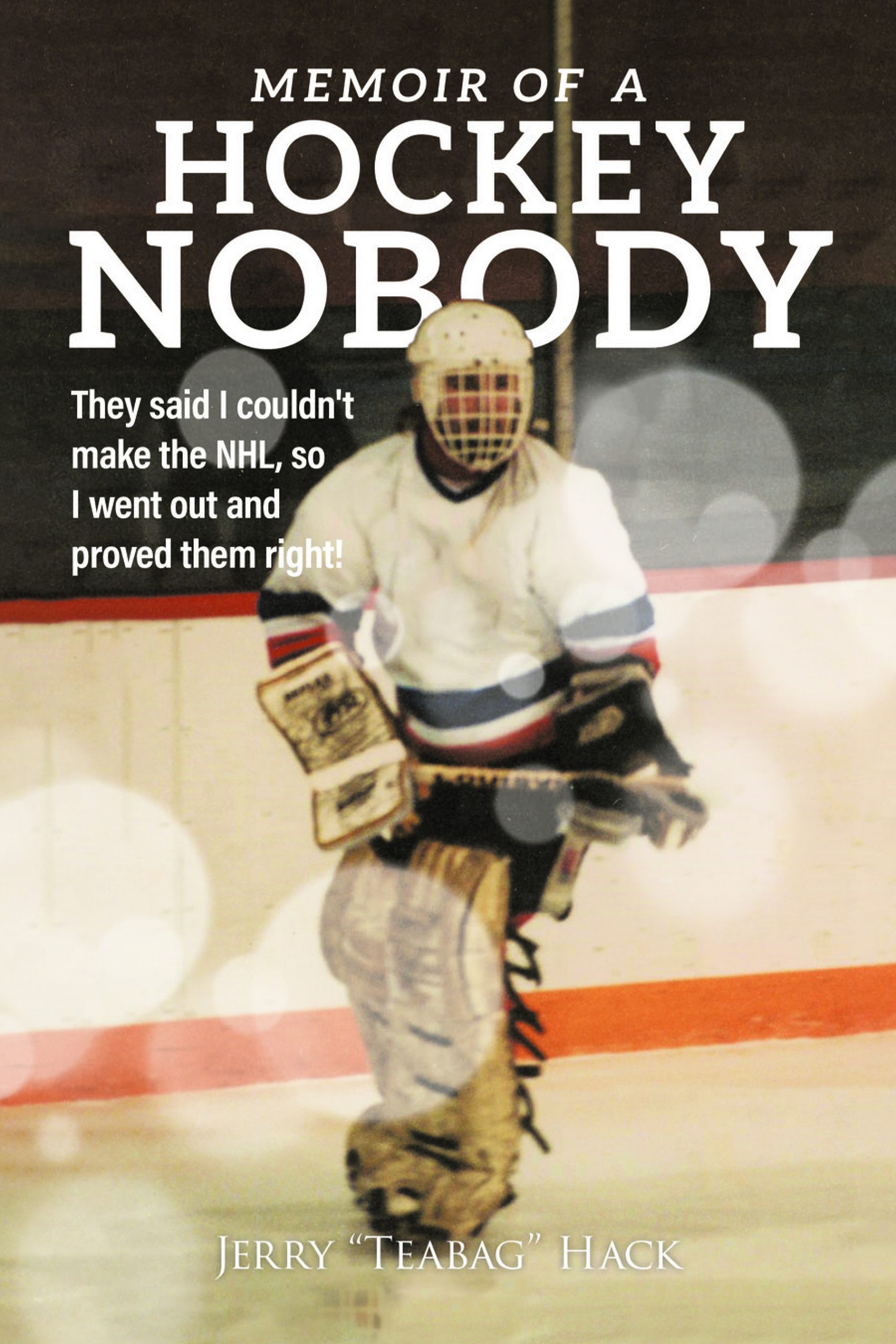 Memoir of a Hockey Nobody is the unlikely true story of an average Canadian kid who grew up playing street hockey. Although he didn’t learn how to skate until his late teens, he took a shot at entering the world of professional ice hockey with, shall we say, haphazard results.

This is an “against all odds” tale of one man’s journey from Vancouver, to all over Western Canada, California, The Yukon, and Alaska. Seemingly blocked at every turn, from managers who believed that someone who came from such humble beginnings couldn’t be any good, to coaches who would rather see big names with bigger reputations. It’s a story of tragedy, triumph and determination. A roller coaster ride with hilarious anecdotes of all the characters he met along the way.

This is a tale for those who dare to live their dream!

In the spring of 1980, the New York Islanders won the Stanley Cup, beating the Philadelphia Flyers in 6 games. Bob Nystrom scored the Stanley Cup winning goal in overtime. I was happy, because finally someone other than the Montreal Canadiens won the cup. Despite rooting for the Canadiens when I was nine, I had grown to hate them. I was a diehard Vancouver Canucks fan by then. The Canadiens just kept on winning and winning. I was so tired of watching them win all the time. four straight years they won the cup without breaking a sweat. Little did I know that the Islanders were now on their way to doing the exact same thing. I would grow to hate them too. It was about a month after the Islanders had their first parade that I was over at the Aitken’s house. John and I still hung out, but not as often as in the past. At this time, I was eighteen and had my own vehicle, (a 1969 Datsun pickup). We were discussing how happy we both were that the Montreal dynasty was seemingly over, when the topic of his hockey team came up. He was always playing in one beer league or another. (At one time he played in the N.H.L. The “Natural Hockey League”) At this time he was playing on a team called the Burnaby Kings, and they were playing at the Columbian 4 Rinks. At one time, this was the largest indoor hockey arena in the world, and was even in the Guinness Book of World Records. As it turned out, the Kings were renting one of the rinks once a week, all summer long. Summer hockey was a new thing, all the other rinks became lacrosse rinks for the summer. John was telling me how terrible their goalie was. The guy’s name was Lonnie. I don’t remember his last name. John was telling me that the guy was the worst goalie he had ever played with. They had nicknamed him “Red Light Lonnie,” because he would let in so many goals. He said that Lonnie was so short that shots would regularly hit him in the head and deflect into the net. One time John said that the puck had been shot into the corner and Lonnie went to go get it, fell down, and while he was trying to get up, the puck went up on edge and had such spin on it after it hit the boards, that it reversed itself and curved right into the net. John said Lonnie was like “Bad Luck Schleprock” of the Flintstones. 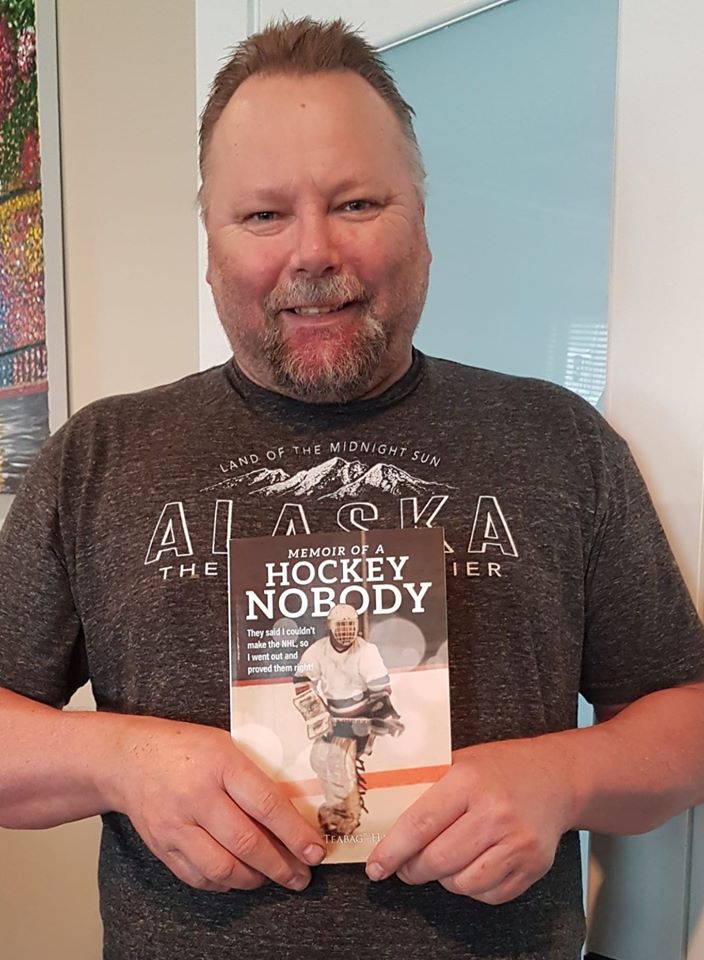 About the Author: I was born and raised in Burnaby, British Columbia. My sisters and I were raised by hard-working blue collar parents. We were and are a tight knit family. I grew up loving sports but hockey most of all. In fact, it was my passion. I read about it, watched it and played it. I was an average student and a good athlete. I could play most sports without looking out of place. But I was born to be a goalie. I graduated from high school in 1979 and a year later began my journey playing ice hockey. 40 years later, I am happily married with a 12 year old daughter and loving life more than ever.