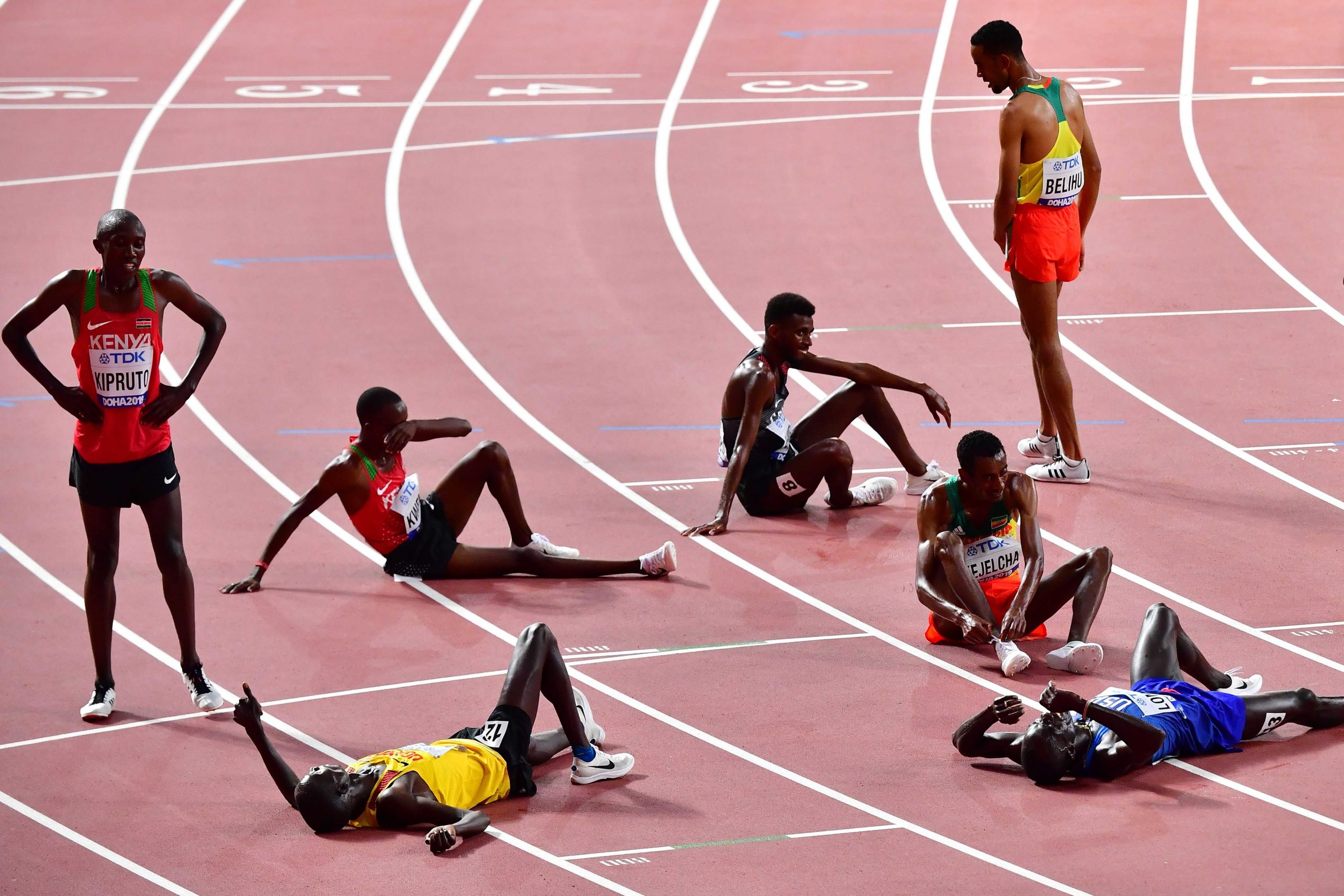 The last two months were supposed to be big for athletics as the season started in earnest ahead of an Olympic Games in July but instead, a host of events have – as in other sports – been either postponed or cancelled.

The first half of the year should have seen the World Indoor and World Half Marathon championships take place in March, and the start of series like the World Marathon Majors, Diamond League and Continental Tour.

The African Athletics Championships slated for June have been moved to 2021 – so with no competition at all, how on earth are athletes coping financially?

“I know of some African athletes who don’t have sponsors and who usually travel to Europe to compete and get some money. With competitions cancelled, this is going to harm them because they won’t have this income to help them prepare for next year.

“So some athletes will be in a very difficult position.”

Athletes’ training schedules have been hugely disrupted in the last few weeks, and countries like Kenya, Ethiopia and South Africa have closed training camps.

Iten is a world famous training base in Kenya thanks to its high altitude and star array of talent, but even this usually-bustling hub is suffering.

“Iten is now weird and boring,” says Dennis Kipngeno, a Kenyan marathon runner who ran his personal best only last month. “Motivation is low to leave the house and run alone. As they say, teamwork makes the dream work.”

Maintaining focus when return dates for competition are so unclear is also a new challenge.

“Being an athlete is all we know, all we do – it is our life,” says Nigerian Blessing Okagbare. “So when things like this happen, it is like a shock. Not knowing what is going to happen is the hardest part in this whole situation for me.”

How do athletes make money?

Runners earn income in three main ways: through sponsors, prize money and/or bonuses from races (dependent on placing and speed), and appearance fees.

“That will be a big burden for many athletes and their families who depend on them.”

The postponed Olympics means that potential medallists will miss out on significant sums this year, just as they will given the World Indoor and Half Marathon championships’ delay.

“Depending on their level, this can represent two-thirds or even much more (of their income) because you also have the competition’s engagement bonus,” says  Zango “So for sure it’s going to have a financial impact.”

Already mindful that athletics is not as lucrative as some sports, Okagbare points out that her income is reduced when she is unable to compete, in contrast to the incomes of sports people on annual contracts.

“When it comes to athletics, compared to other sports, we are broke,” she says. “Football is very glamorous, and the players make a lot of money. For what I do for a living, I can’t sit on the bench and be paid money – but a footballer can.

“If I want to make money, I have to show up and compete. There are some competitions where if you false start, you don’t get your appearance fee, or you get half if you don’t finish the race.”

The track season was supposed to start on 17 April with the Diamond League in Qatar but that, like all but one of the first eight meets, has been indefinitely postponed.

“I have lost over US$20,000 which I was assured of in appearance fees,” laments Botswana’s Nijel Amos, who won silver at the 2012 Olympics.

The 800m star, who crashed out of Rio 2016 in the heats, had been careful about his schedule in a bid to peak at the Tokyo Games, which should have started in three months.

“This year I was saying to myself: ‘Ok Nijel, you’re only picking key races so that you can be fresh at the Olympics’,” he explains.

“I was going to race few races, from which I was going to make good quality financials to be able to sustain me the whole year. But now it’s zero.”

Many athletes are now thinking of two main things – their outstanding Olympic qualification and how to survive financially.

Egypt’s Hassan Abd El Gawad, who won bronze at the last African Athletics Championships, had been training in South Africa ahead of May’s Continental Tour event in Kenya (now postponed) but is now back home.

Organised by World Athletics, the Continental Tour is a second-tier version of the Diamond League where the winner of a core event like the hammer is guaranteed $6,000, with the prize money sliding down to $800 for whoever finishes eighth.

“There are many competitions you can go and win, and when you win you get money, but those competitions are now all cancelled until June,” he says.

“I am surviving because I get a monthly salary of $124 from the Egyptian federation while the club I represent, Al Ahly, give me $622 per month. But this season was important to qualify for the Olympics, not to make money.”

Berlin, Boston, London and Paris are some of the major road races that have been postponed to the second half of 2020, while others, such as Rome, have effectively been cancelled this year.

So any athlete who might have run up to four marathons per annum will probably only run one, at best.

“Consistent racing means improved times personally and of course more opportunities financially. I was to compete in Grandma’s Marathon in Minnesota on 24 June and then Medtronic twin cities in Minnesota in October, but Grandma’s has been cancelled. No word yet on Medtronic.”

Marathon runners can earn as little as $1,000 a race in prize money all the way up to $100,000 and more depending on race status and final position.

At London, for example, elite athletes compete for a total of $313,000 in prize money with the male and female champions each taking home $55,000.

The top 12 finishers are rewarded, with the 12th person taking home $1,000, while there is additional pay for faster times, which can be related to a shoe contract and/or breaking the world or course record.

Nonetheless, the fact that many races will be bunched closer together in the calendar means athletes will inevitably miss some of the marathons, or half marathons and 10k races, which they had once aimed to contest.

“It is going to be a disaster for the athletes,” says Boeting. “Half of the year for road race athletes is already gone with all the races cancelled. This means that athletes without contracts will go to an income of zero for the first six-seven months of the year, and those with contracts will lose 40-70% of their income.”

Amidst all the uncertainty about when races might resume, it is not only the athletes who are suffering but their agents too.

“Agents depend on commission and if income from competitions is zero, it will definitely hurt our business,” he says. “We have to make adjustments, and maybe work with 50% less income than normal.”

With no events to contest, some athletes can fall back on their shoe contracts, which range from $5,000 per year for smaller deals to $100,000 plus for bigger ones.

“The ones with small contracts will struggle because if you have a contract of $5,000, is that really enough to sustain the lifestyle you’ve put yourself in?” asks Boeting.

But for some, a shoe deal means there is at least one less thing to worry about.

“During this pandemic, I don’t have to worry about how much to spend buying or replacing running shoes or on getting the right clothes for the training weather – that’s where the contract comes in handy,” Amos explains.

Nonetheless, he freely admits that he is turning to savings and investments to cover this period which highlights how life might be for those without shoe contracts.

Boeting says athletics should plan for a very bad 2020 and perhaps 2021 too.

“Who knows what will happen? What will sponsors do? Will they stay in the sport with less money? Let’s hope they will stay, even if with less money, and build again.”

Some federations have tried to cushion their athletes from this financial crisis, such as Ethiopia’s which has given $130,000 to help 211 athletes and 56 coaches.

Meanwhile, World Athletics (formerly known as the IAAF) has launched a fund worth US$500,000 to support professional athletes who have lost most of their income in recent weeks.

“It’s a struggling time for us athletes just to keep our career going, let alone trying to get to the next phase of anything,” says Amos.

“Are organisations going to keep funding us as if we’re getting ready for the Games or are they going to pause that funding until next year? And if they pause that funding, how much damage is that for us? You know, it’s a really tough time being an athlete right now.”