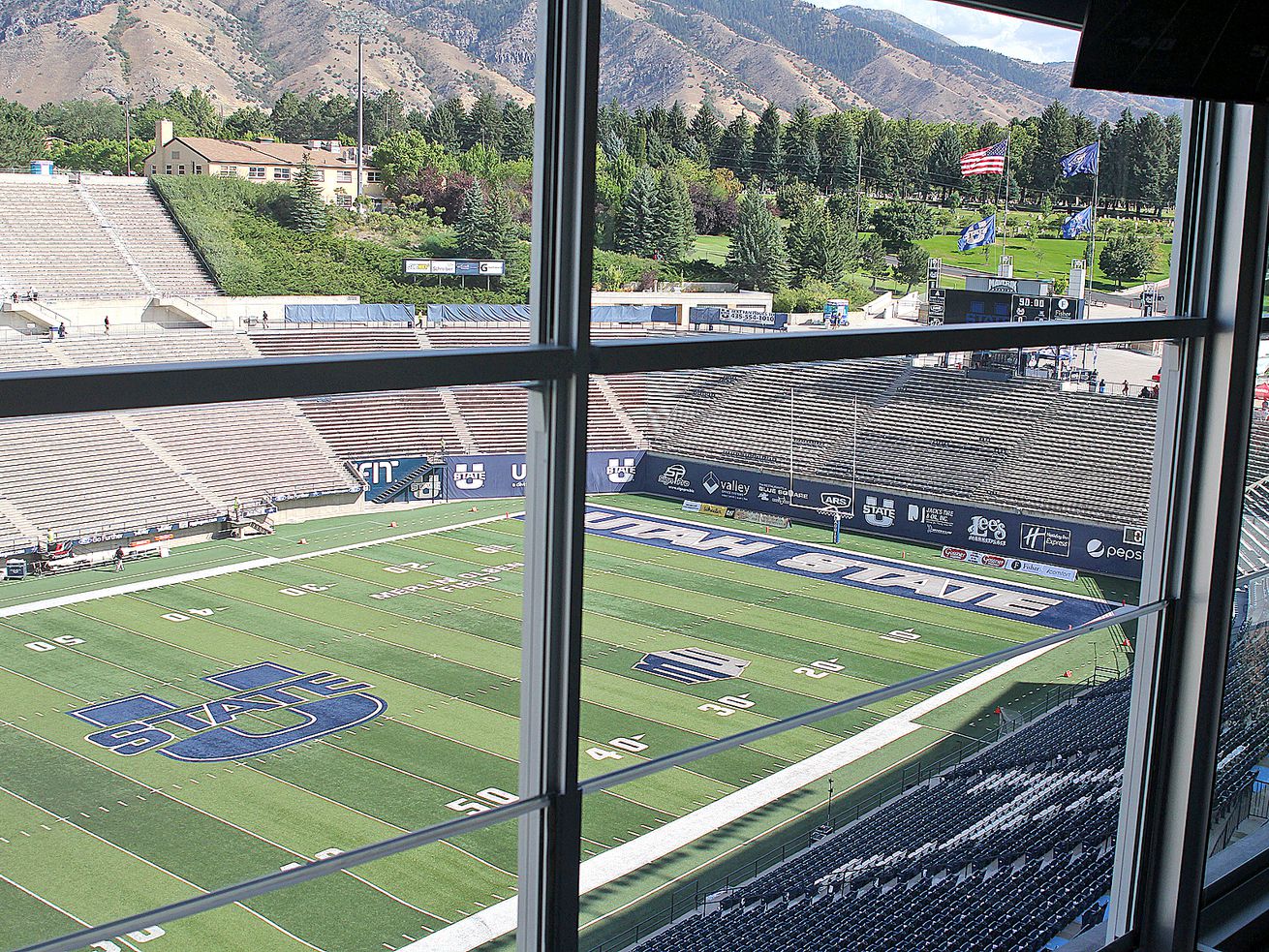 20000101 The view of Merlin Olsen Field from a suite at the new West Stadium Center at Maverik Stadium in Logan. | Jeff Hunter

SALT LAKE CITY — The latest news concerning college football this fall hit close to home in the state of Utah.

Stadium’s Brett McMurphy was the first of several national media to report Monday that the Mountain West Conference, which includes Utah State University, is canceling its fall sports season due to health concerns related to the novel coronavirus pandemic.

The league made the official announcement less than an hour later.

“Since the start of the pandemic, our membership and staff have been working diligently to prepare for a fall sports season,” MW commissioner Craig Thompson said in a statement. “We were hopeful we could carefully and responsibly conduct competition as originally scheduled with essential protocols in place. However, numerous external factors and unknowns outside our control made this difficult decision necessary.

“I fully understand the impact of this outcome on our student-athletes, coaches, administrators and staff who work so hard daily to play the sports we all love, and I share in their disappointment. We will continue to navigate this pandemic together, overcome the obstacles and return to intercollegiate athletics at the earliest opportunity.”

The MW said it will look into the feasibility of moving fall competition into the spring.

Last week, Utah State announced a revised football schedule a day after the MWC announced it would play a 10-game schedule this fall, in addition to canceling the fall seasons for men’s and women’s golf, men’s and women’s tennis, swimming and diving, indoor track and field, softball and baseball, while leaving men’s and women’s cross country under review and limiting women’s soccer and women’s volleyball to conference-only regular season competition. The MW postponed all the league’s fall sports with Monday’s announcement.

“While we are disappointed about the postponement of our fall sports and the opportunities for our student-athletes to compete, the safety and well-being of those student-athletes has been, is and always will be our No. 1 priority,” USU athletic director John Hartwell said in a statement.

“This has been a stressful time for our student-athletes with all the uncertainties regarding their competitive seasons, and even though sports will not be played this fall, we will continue to provide the resources necessary for their mental health and well-being, and academic successes.”

Utah State was tentatively set to open the 2020 college football season Oct. 2 against BYU in Provo, while it had moved back the start of fall camp to Aug. 24. The MW’s announcement to postpone fall sports canceled three BYU games, with a road game at Boise State (Nov. 6) and a home matchup with San Diego State (Nov. 14) in addition to the game against the Aggies.

All this happens as uncertainty surrounds the 2020 college football season due to COVID-19, including reports the Big Ten could be the first of the Power Five conferences to call off football this fall. Like the Mountain West, the MAC expressed desire in exploring the possibility of moving fall sports to the spring, and The Detroit Free Press reported that the Big Ten will cancel its fall football season, adding that league commissioner Kevin Warren prefers a spring football season.

Utah State players reacted to the news on social media.

“Do y’all know how cold it is in Utah in the Springtime?!” junior cornerback Andre Grayson said on Twitter.

Do y’all know how cold it is in Utah in the Springtime?! https://t.co/IuWnDmAHcN

“To clarify if I say I want to play that means I want a G(UA)RANTEED FULL SEASON. INCLUDING a bowl game when we get to that point‼️” senior linebacker Kevin Meitzenheimer said.

To clarify if I say I want to play that means I want a GAURANTEED FULL SEASON. INCLUDING a bowl game when we get to that point‼️

One conference athletic director didn’t completely close the door on competition. Air Force athletic director Nathan Pine called it the “appropriate course of action at this time,” while adding his school will look into the opportunity of competing against fellow service academies. Air Force plays Army and Navy each year in football for the Commander-in-Chief’s trophy.

“I’m pleased that Air Force will have the opportunity to continue to explore competitions against Army and Navy if conditions allow as we have similar physical missions across the service academies,” Pine said in a statement.